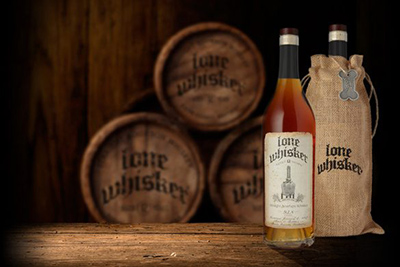 The Tale of Lone Whisker

The tale of Lone Whisker began a dozen years ago with a crash - and a whimper - along Kentucky's storied Bourbon Trail, Route 127. John Schwartz and Kent Jarman had grown to share similarly discerning tastes for whiskey. During their years of crafting small-lot, world class wines, it became regular, almost ritualistic, practice after a late night's work to challenge (and reward) their palates with finely-crafted bourbon.

By the time this series of events unfolded, John and Kent had contemplated whiskeys and small batch bourbons from all corners of the globe. They were self-taught, well-rounded students in admiration of bourbon's finest professors - the producers they'd never met but yearned to emulate. Thirsting to learn the tricks of the trade, they journeyed to Kentucky and embarked along the fabled Bourbon Trail. They coursed through green pastures, getting a little lost along the way. The duo was surrounded by history and legends; and little did they know as they cruised down the trail, they would soon encounter the catalyst for their own 12-year, barrel aged, Kentucky straight bourbon whiskey.

Rounding a sharp bend, they screeched to a stop only yards away from a classic green '69 Chevy, flipped on its side. A few good samaritans already were working to free the driver from the truck's cab. A timid whimper drew them to a young Blue Tick Hound cowering in the brush. He limped toward them, scratched and bruised from tumbling out of the Chevy's flatbed. His collar read: Whisker. John and Kent called to the group gathered at the truck, "What do we do about the dog?" "Better take him, friend," a somber voice returned. Whisker's original owner never came for him; and they preferred not to speculate about the reason. Down the trail, John and Kent soon found a home not only for their budding bourbon project, but for their new friend as well. Whisker became the faithful distillery dog - and showed them the tricks of the trade.

Lone Whisker is a proprietary blend of 74% corn, 21% rye and 5% malted barley. Proofed at an elegant 93.8 ABV, our Bourbon rests 12 years in oak barrels. Some of you have asked why we don’t age their Bourbon longer and offer a special release. Their answer is simple: "I find that 12 years is ideal. At this age, our Bourbon exhibits balance and grace. The amazing aromas of cherry, spice and toffee on the nose, and palate, are not masked by excessive maturity. Also, we would have to charge you more for a 15-year- old, (just because). So, trust me, this 12-year- old version is perfection!"

Each bottle of Lone Whisker delivers in a burlap sack, with a dog tag around its neck in tribute to the brands namesake (RIP, ol’ Whisker!). A mere 2,000 bottles will be made available annually.